The birth of a new foal always brings excitement and hope. And the birth of Hickok and Nova’s 2018 foal was no exception. Nova is a young horse, At age 5, she has already given birth to three foals despite the current management plan that applies fertility control to the young mares. This new foal, Nova’s third, is the first colt. He has been given the name, Sundance. This post will introduce the young foal through visits to the band during the first two weeks of his life.

It was April 4, 2018 when we got the word of Nova’s new foal. He was born into Hickok’s band on the low end of the horse range near Crooked Creek Bay. Hickok’s band is commonly called “The Greeters” as they are often the first band of horses seen in the Bighorn Canyon Recreation Area. A band of horses has claimed that particular spot of the range and for good reason. It has fairly lush vegetation, good water, and is isolated from other competing bands. Little Sundance was born into a good band living in a good area.

John and Lynda Nickle headed out to see Sundance on April 5. It was a cold, snowy April morning and they found the band huddled in a group of trees. Little Sundance showed a lot of spunk at that young age. He wanted to run out and play, but his mother brought him back to the shelter of the trees. John captured a perfect family photo that shows Nova and her offspring with their “copper penny” colors. 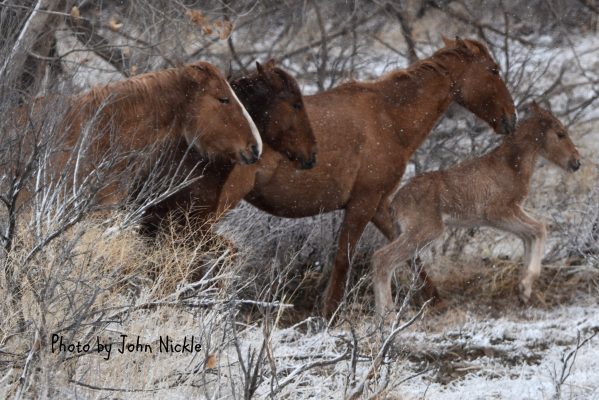 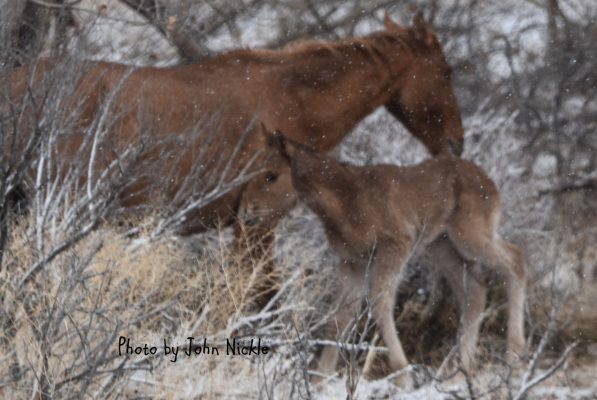 Two days later, I got to finally go out and see him. My first glimpse of him was as a sleeping foal. This isn’t a surprise as the new ones spend much of their time sleeping. The rest of the band was scattered across the ravine. 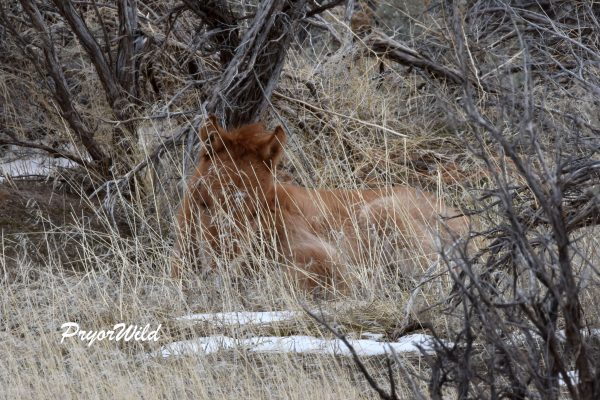 Sundance got his name from the “star” theme that was started year’s ago with the birth of his grandmother, Kitalpha. The star Kitalpha is in the Equuleus “Little Horse” constellation. That was followed by Nova, Prima, Rigel Starr, and now Sundance.

It didn’t take long for the sleeping foal to wake up. He kicked up his heels and ran towards his mom. Sundance was already showing evidence of being a strong, sturdy foal. 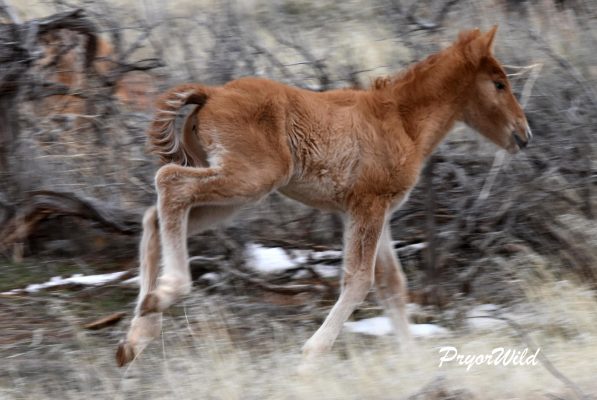 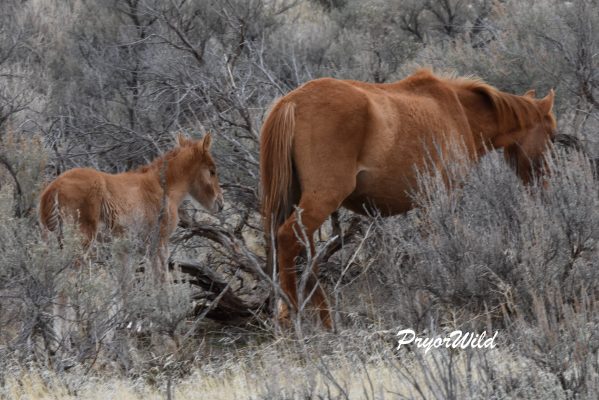 Nova and Sundance moved with the rest of the band a short distance up the ravine. The foal follows safely with his mother. 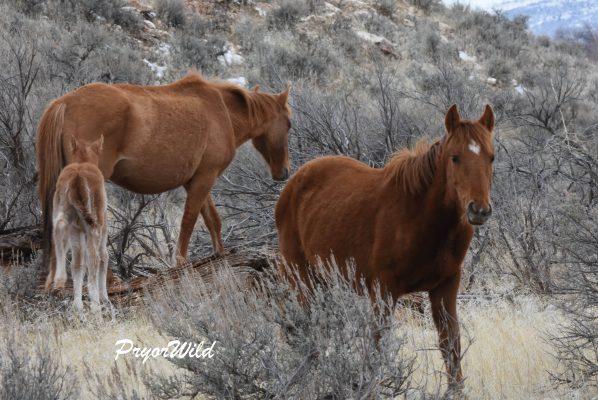 Sundance’s sister, Rigel Starr, was the first foal born in 2017. She was a similar color to her little brother, but has deepened into a beautiful chestnut color. It is just amazing to see the difference the first year makes in the growth of a horse. Nova is a red dun and right now Sundance shares that color.

The next visit to Sundance was on April 14, 2018. The foal was now 10 days old. The band was in the same ravine as before, this time farther to the north. This time the foal was up and surveying his world! 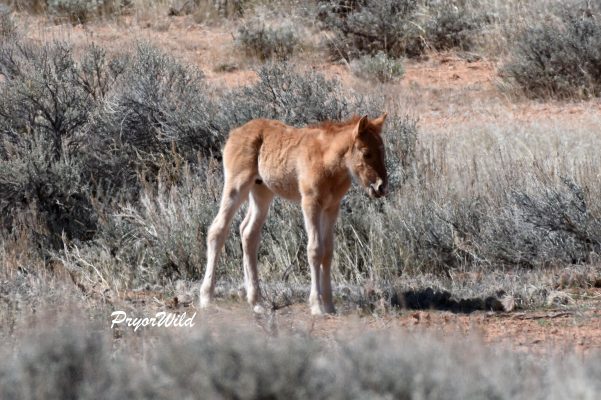 The foal was under the watchful protection of his sister, Rigel Starr, and mare, Seneca. They were never far away from him. Seneca is an amazing mare. She has been in this area since I began watching the horses in 2004. That was the year her son, Exhilaration, was born. It wasn’t far from this spot that I watched him take his first run! On a side note, Exhilaration was removed and he now lives with Steve and me. Seneca was born in 1999 which makes her 19 this year. She looks great and has a wonderful wild spirit! 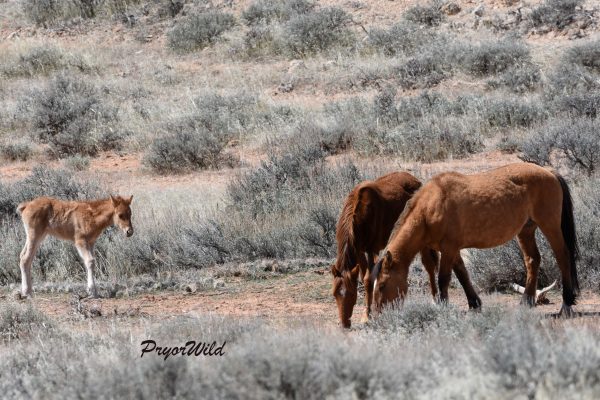 After a short time, Sundance headed over to his mother. Even at just 10 days old, he walks with strength on his long legs. 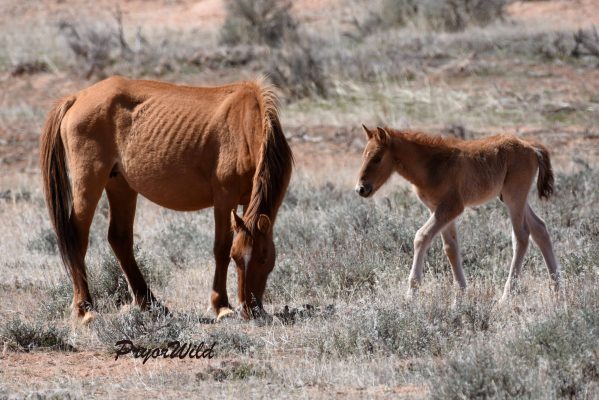 Then is is lunchtime for all! Sundance has a good drink of milk. It is good to see Nova beginning to fill out on the new spring vegetation. 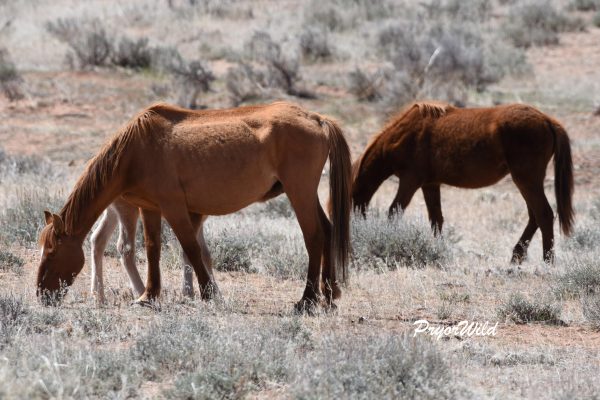 After lunch it is time for a nap. Again the mares show the protective shield they put around the foal. Nova walked over and made sure all was well with her foal. 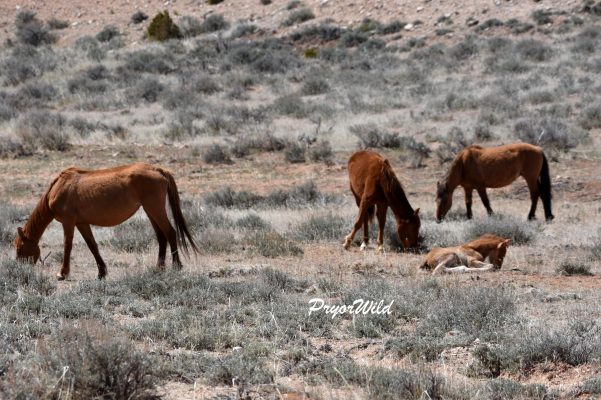 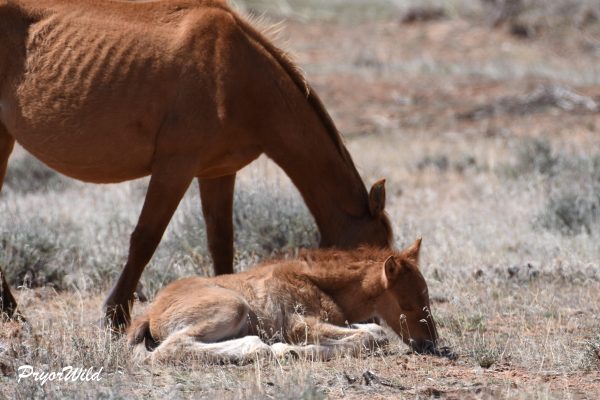 The soft dirt and sagebrush made for a comfortable bed for little Sundance. This is the point where I left Sundance…best to let the sleeping foals lie! 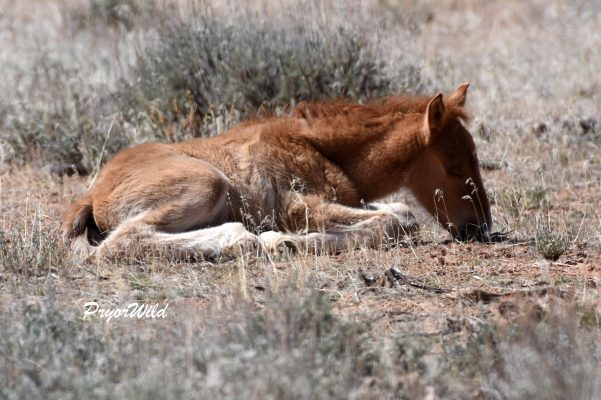 Kitalpha and her two year old son, Quasar, were grazing on a nearby slope. These two are perfect examples of grulla/grullo. Each of them have the leg stripes and dorsal stripe that are typical of the primitive markings. But what is exceptional on the two of these are their neck bars. 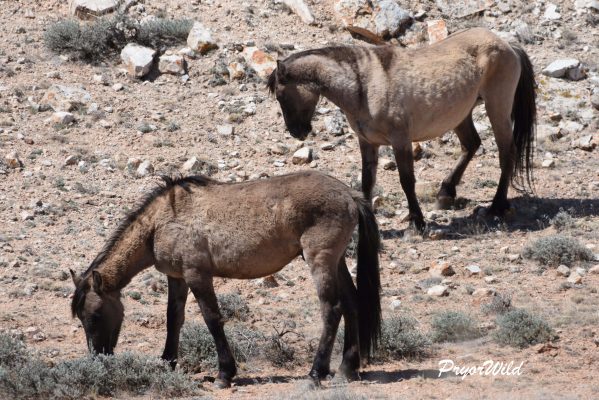 Prima and Hickok were off by themselves up the draw. Prima is the oldest of Nova’s offspring. She is a lighter shade of red dun that we refer to as apricot dun. 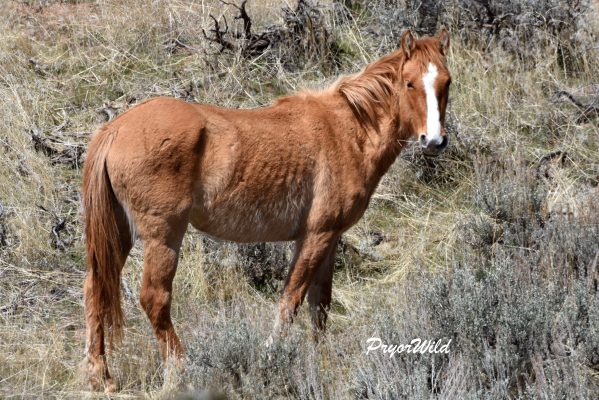 Hickok is looking amazing right now. His red bay color has taken on a darker shade right now which reminds me of his mother, Belle Starr. What a handsome horse!! 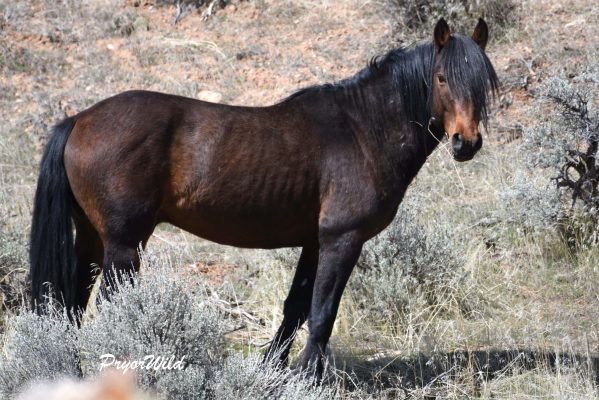 So that is our introduction to Sundance, the second 2018 Pryor foal. Through these visits you can see that the foal looks good and has a great, protective band that can help him grow into a strong Pryor stallion.