On September 11, 1968, the Pryor Mountain Wild Horse Range was established by established by the Secretary of Interior, Stuart Udall. This action came as the result of a group of local people who saw the importance of preserving the special group of horses that live just to the north of Lovell, Wyoming. That is where the history of the Pryor Mountain Wild Mustang Center began as well.

The Mustang Center evolved from the Pryor Mountain Wild Horse Association, a loosely knit group of local citizens who worked to save the wild horses in the mid-1960s. Some of the members of the committee who remained active through the years were Bob Doerr, Wes Meeker, Reverend Schwieger, Emil Doerr, and Phyllis Hill, along with the Lovell Chamber of Commerce and the Town of Lovell. John Nickle supported the committee as Town Manager of Lovell. They all worked to help Lloyd and Royce Tillett and their families in their battle with the BLM to save the herd of wild horses in the Pryor Mountains. The work for the Pryor Horses was brought to the public’s attention through the Lovell Chronicle and reporter, Beverly Robertson. Hope Ryden, then a roving reporter with ABC TV, aided the cause by airing a report on national TV that brought nationwide attention to the plight of the Pryor horses.

Finally in 1968, Secretary Stewart Udall established the Pryor Mountain Wild Horse Range in Montana and Wyoming. This became the first public Wild Horse Range in America. Clyde Reynolds, then Mayor of Lovell, was named to the first Wild Horse National Advisory Board, which convened their first meeting in Lovell. Reverend Schwieger liked to say, “Come to Lovell to see the first horses on the first wild horse range.”

The Pryor Mountain Wild Mustang Center was incorporated in 1998 by Reverend Floyd Schwieger and John T. Nickle with initial donations of $300 each. John Nickle served as President and appointed Reverend Schweiger, Richard Doerr, Jim Edwards, Daphne Hartman, and Phillip Schaeling as the original board. John Nickle continues to support the Center as the Vice President of the Board of Directors. His wife, Lynda, worked tirelessly for many years as the Director of Operations. Sadly, Lynda died on September 4, 2020.  Her enthusiastic smile will be missed!

The Pryor Mountain Wild Mustang Center now serves as a permanent advocate group for the Pryor horses. The network of support for the Pryor Horses has grown from a local, to a national, to an international level. The Mustang Center serves as the local source for information and advocacy for the horses. Thousands of visitors from all over the United States and the world visit the Mustang Center each year. These visitors are provided information about the horses and where to find them in their mountain home. This was the dream of Reverend Schwieger and remains the dream of John Nickle and the Board of Directors. Please join us in supporting the Pryor horses. 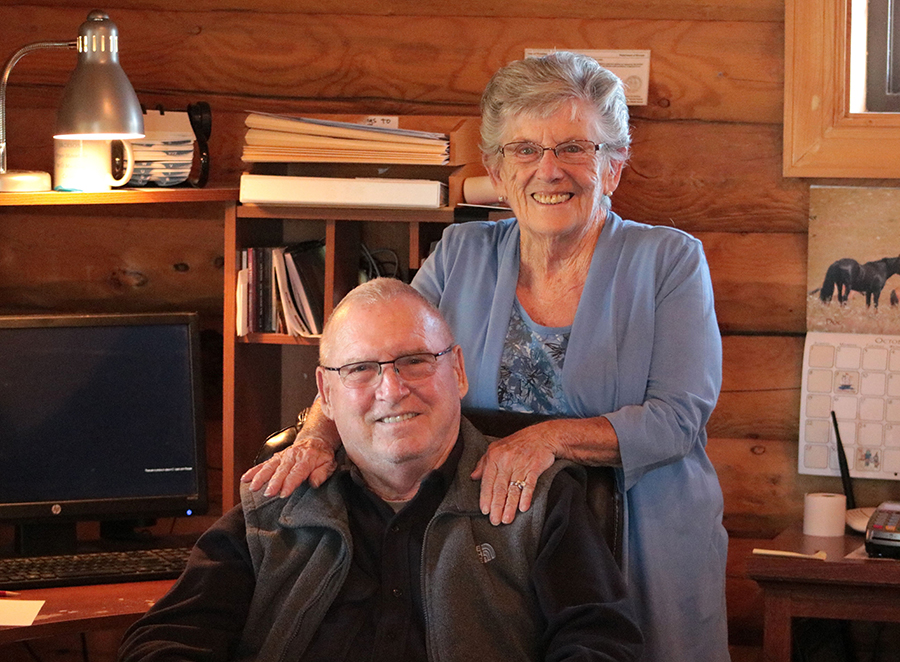 In Memory of Lynda Nickle

A Friend of the Pryor Horses